Nautel’s engineering team is in the advanced stages of replacing the legacy (Flash) AUI with the HTML5 version. The new version not only takes advantage of the latest browser capabilities and smaller size, but it works across desktop, tablet, and smartphone browsers. The new AUI, like the original, runs right from your transmitter, so there is nothing to install or maintain on your remote devices. This major software release will be provided for free. 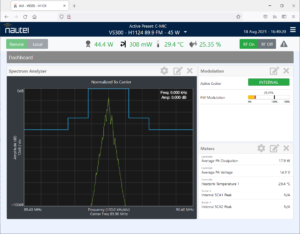 Using the most recent developments in HTML5 we are able to both retain the rich graphics of the original AUI and extend it in ways that were never possible in Flash. AUI will be much smaller so it starts faster and work better on limited bandwidth connections. 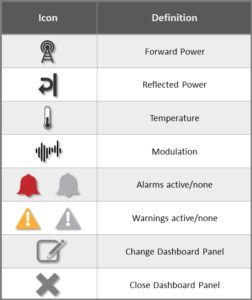 
The new Dashboard icons provide a cleaner interface and “hovertips” explain what they are as you get to know them. 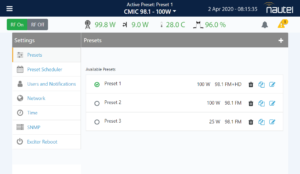 Diving into the user interface a bit deeper, here is the Presets page. Everything is usable even when operated on smaller touchscreen devices like a phone.


The upcoming development stage is beta testing for each transmitter series. If you are interested in being part of the test, and have a transmitter you can spare to do the testing on, sign up here: BETA SIGN-UP PAGE

Also check out this recent article about the AUI in Radio Guide. 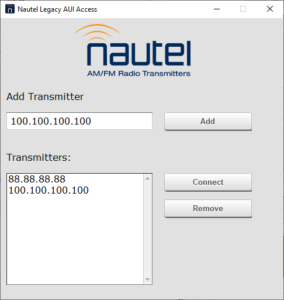 Nautel is pleased to provide our stand-alone Windows and macOS desktop app, enabling direct access to your legacy AUI without a browser. The app also lets you can choose when you want to migrate to the new AUI once it is released.


Linux: User tests indicate that the AUI App seems to run under Wine. However, as this may require distro-specific adjustments to run (such as font installation), this use is not supported, so please no support calls.

Adobe has now officially ended Flash support so we recommend that customers switch to the new Legacy AUI Access App, as the secure way to connect to your transmitter’s AUI. Note: the app requires transmitter software released in February 2016 or later, as these releases include updates required by changes in Adobe’s Flash technology at that time.

There are some 3rd party apps or special browsers that may run the legacy AUI, but the only supported solution is the Nautel Legacy AUI Access app.

The AUI is a monolithic Flash app that is about 9 MB in size, so for low bandwidth connections this may take some time to download to your computer (Enough time to go make coffee as one engineer at NAB told us!). The good news is that once downloaded the only flow through the connection is real-time data from your transmitter. The following tips focus on transmitter connectivity and security.