Hey folks – NAB is over for another year and it was one for the record books… at one point, the step counter in my phone told me that I had walked over 12 miles that day, and that was before the show officially started!

I am back from the desert, mostly re-hydrated, recovered and slowly catching up. If you stopped by to say hey and didn’t have a chance, I apologize – it was a crazy week!

Although several of us get to Las Vegas the week before, some to attend the Public Radio Engineering Conference (PREC) and others to get all of the shiny stuff set up on the show floor, for a lot of folks, the show doesn’t start until the weekend before the floor opens, when the Broadcast Engineering and IT Conference (BEITC) starts and the vendors start doing their sessions. One of these is, of course, the Nautel Users’ Group and I am certain we broke another record for attendance this year – thank you to everybody who stopped by to spend a good part of their Sunday with us and we hope to see you again next year! It was good to see several new faces this year, although I had to run over to the Convention Center to present a paper and didn’t have nearly enough time to hang around as I would have liked!

One of the best parts about NAB (besides the food – I could probably write an entire column on the various eateries I have discovered over the years) is the chance to meet up with old friends, make new ones, and trade war stories, as well as hearing tons of suggestions, thoughts and ideas. I make no secret of continually asking for input on topics for this section of the Waves – the more stuff you folks provide for material, the less I have to come up with on my own! This issue is no different – it is no secret that our use of Flash in the AUI has been a blessing and a curse. It is one of the best ways to dynamically render complex graphics out there, but support has been off and on over the years and is rapidly going away. We have a game plan in place for that, which was well covered during NAB and in other areas, but until things are fully in place, the ongoing challenge of finding new ways to help our customers get the most out of things continues.

In that vein, one interesting conversation I had this NAB was with Scott Schmeling, of Minnesota Valley Broadcasting out of Mankato, MN. Scott oversees several of our transmitters and has found a cool way to make AUI access a little easier on his Windows 10 machine. I’ll let him tell about it in his words…

I was able to attend the Nautel User’s Group as well as the afternoon AUI (Advanced User Interface) session at this year’s NAB. During the AUI session, Nautel’s Matt Herdon talked about how the current AUI uses Flash technology (referred to as the “F-word”) and that big changes will be out sometime next year. But on the way back to the hotel I started thinking about something.

Some time ago I updated my laptop from Windows 7 Professional to Windows 10 Professional. For the most part it was a pretty uneventful change – with at least one exception.

I have a number of Nautel transmitters out in the field and have been logging into them from wherever I am using the AUI. Rather than typing the IP address manually, I have shortcuts for each transmitter which are nested inside a folder on my desktop. Each shortcut has the IP and port (http://nnn.nnn.nnn.nnn:10080/). The port depends on how you have port forwarding set up in the router at your transmitter site. Everything worked swimmingly —- until I updated.

I had always used Internet Explorer as my default browser. If you have updated to Win10, you know that IE was replaced with the new Edge browser, which is now my default (even though those “in the know” suggest using anything else).

When I double-click on any of my transmitter shortcuts the operating system starts my default browser (Edge) and goes to the address. Herein lies the problem. The AUI is built using Flash technology, but Edge does not support Flash! To connect, I have to click on the three horizontal dots in the upper right corner of the screen, then scroll down and choose “Run with Internet Explorer”. It gets me there but there are some unnecessary steps.

What I was thinking about was – if there is a way to force my shortcuts to use a NON-default browser. A little research on Google provided the answer. I had to put the path to IE (or YOUR preferred browser) in double quotation marks ahead of the address. Like this,
“C:\Program Files\Internet Explorer\iexplore.exe” http://nnn.nnn.nnn.nnn:10080/

I tried to manually edit the properties of my original shortcuts but they didn’t work. I checked – NO TYPO’s! But here’s what I found that DID work properly.

Find a spot where you would like your (first) shortcut and right-click/new/shortcut. 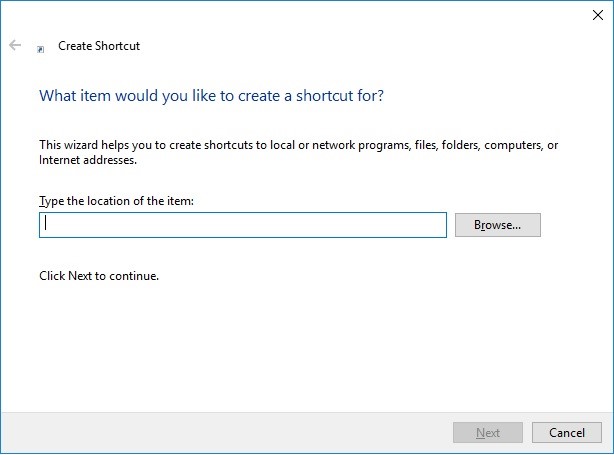 Then ‘BROWSE’ to the program location and click ‘OK’.

Once the path to the program is in the address field, place the cursor AFTER the second quotation marks, press the space bar and add the IP address of your transmitter like this http://nnn.nnn.nnn.nnn:10080/ . Your port depends on the port forwarding settings in the router at your transmitter site.

iexplore.exe is in the field, Change it to something more appropriate and click ‘FINISH’.

You will see the shortcut placed where you started. It will have the Internet Explorer Icon. If you want, you can right-click the icon and click on ‘CHANGE ICON’ to change to something else if you would like.

That’s it. Easy as pie and works like a charm!!