Hey folks – hard to believe that we’re well into 2020. In our part of the world lightning season is just around the corner (or already here in some locations) and summer trade show season is coming up fast! It’ll be interesting to see how many shows happen in real life this year and how many are moved to virtual forums. For example, our Virtual NUG Radio Technology Forum was done by webinar, to record-breaking numbers. Definitely, if all else fails, you can wash your hands, grab a coffee or glass of water and keep an eye out for more Nautel Webinars! If you’re a “Twitterbookagram” sort of person we’re in all those forums as well. Feel free to reach out in any or all of them, just search for Nautel.

A few years back, some readers may recall I wrote an article about building your own quarter wave stub… these are good devices for adding some isolation if using a low power transmitter to replace the exciter and IPA in a tube rig. They’re also very helpful for providing a DC path to ground for lightning protection or in the event of various other faults coming down the coax.

A lot of folks have also remarked that it can be difficult to roll your own, when you’re working with something bigger than RG-213 or similar, and they’re correct. We make stubs to order for 7/8, 1-5/8 and 3-1/8” line, either flanged or unflanged. You can get a quote from your favourite Nautel reseller or directly from our Support team ([email protected]). Note that they will need to know line size, whether you need flanged or unflanged and your desired operating frequency. 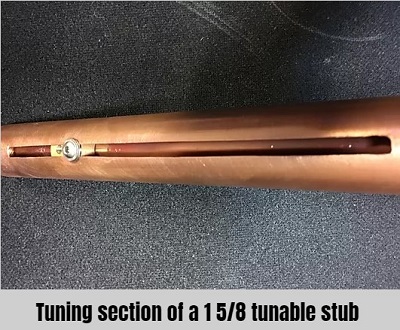 However, if you’re in need of an alternative source, or you need a tunable stub that can easily be changed from one frequency to another, Fred Francis with Xenirad, has come up with a 1/4 Wave Shorting Stub. Thanks for the info, Fred! Side note, Fred has worked with us on other projects through the years, so while not directly affiliated with Nautel, he does have a good familiarity with our product line.

On the topic of customers solving problems, folks who have our V Series transmitters from 3.5 kW and up may be aware that the original power supplies have become obsolete. Engineering and Support have gone to bat and come up with an adapter and replacement supply that provides a form, fit and function substitute, so we’re covered. It does come at a higher cost than the originals and some folks have asked about repairing the older supplies. Where they are outsourced, that’s not an option on our end, but whenever I come across somebody who’s had some success with repairs, I try to pass the information along – with the understanding that these are not official Nautel sanctioned repair tips, as we’ve not had the opportunity to test and verify in-house. However, if it helped somebody else out, I figure it might be worth letting you know.

In that vein, I received a series of emails from Kevin Larke, of Midwest Communications in Lansing, MI on steps he’s taken during troubleshooting and repair of several of the UG39 power supplies. The communications happened over several emails, but Kevin provided a detailed summary with photos in the last one, which will be copied verbatim below. Thanks so much for the information, Kevin, this is very useful – I’ll make sure we get a swag kit on the way.

“I replaced all 27 electrolytic capacitors after it stopped working on New Years Eve. All 22 of the radial lead capacitors tested good with good capacitance readings and normal ESR numbers. There were 5 surface mount electrolytics. The 2 largest 100uF caps tested decent and were still good. The 3 smallest ones had slightly low capacitance and high ESR readings. There were two 22uF 35 volt and one 10uF 50 volt that were weak. One of the 22uF caps had a very high ESR reading around 40 ohms. The new fresh ones read around 2 ohms. That capacitor was the C24 that was installed with the polarity backwards from the factory. 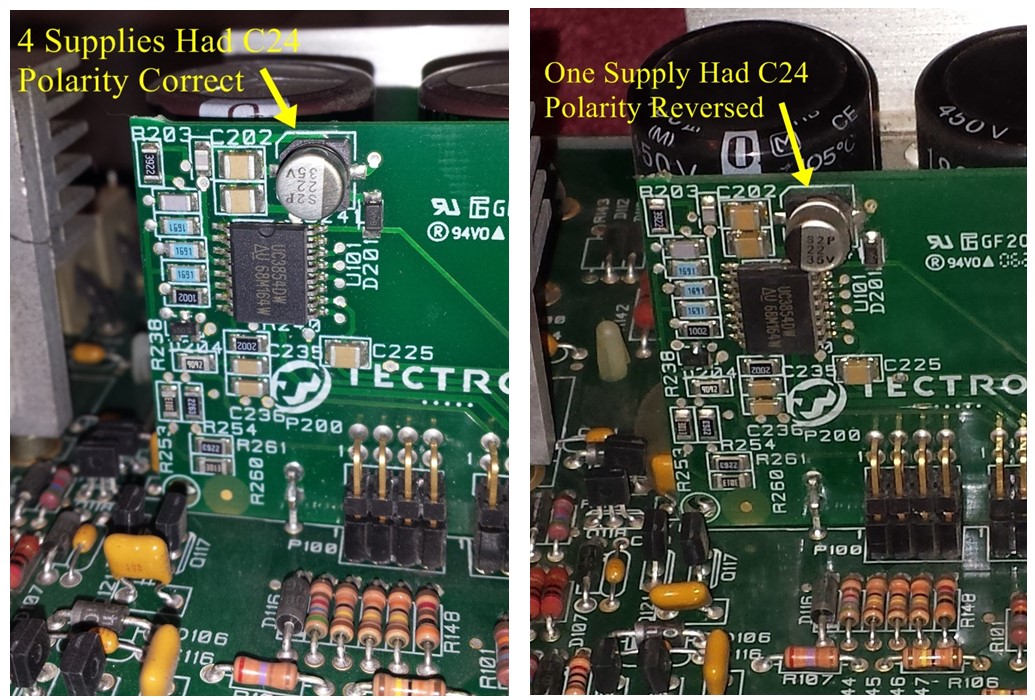 When I replaced the caps in this supply, I guessed that the polarity marked on the board for C24 was wrong. It worked for 12+ years that way, so I thought it needed to be that way. I soldered the new 22uF 35 volt radial lead cap in the C24 position the same way I found it, with the polarity opposite the way the board was marked.

The new radial lead capacitor ended up exploding. It sounded like a firecracker. The supply was working before the cap exploded. Afterwards, I could hear a relay clicking about twice per second and the two front panel LED’s were also blinking at that rate.

I took it back to my shop and found the aluminum can from the capacitor loose inside with some debris from the capacitor. I installed another 22uF 35 volt radial cap in the C24 position, but this time with the polarity as shown on the circuit board, and the same as the other 4 supplies in the transmitter. The symptoms were the same when I tried it in the transmitter. The relay was clicking, and the LED’s were pulsing.

I found the data sheets and typical application schematics for the UC3854DW 16 pin surface mount IC near C24 ion the 070-146502-A circuit board. I discovered that the negative side of C24 was connected to the ground pin #1. The positive side of C24 was connected to the Vcc pin #15. I was getting a dead short from the Vcc to ground. I found that removing the adjacent 070-146503-A circuit board from the main board opened up the short for the IC power.

Something on the adjacent board seemed to be causing the dead short to ground for the DC power to that IC near C24. I found a shorted diode underneath the small transformer on the 070-146503A board. It was a 1 amp 600 PIV ultra fast diode type BYV26C. It is marked D600 on the board. The cathode of D600 is connected to a 470uF 35 volt radial lead cap. 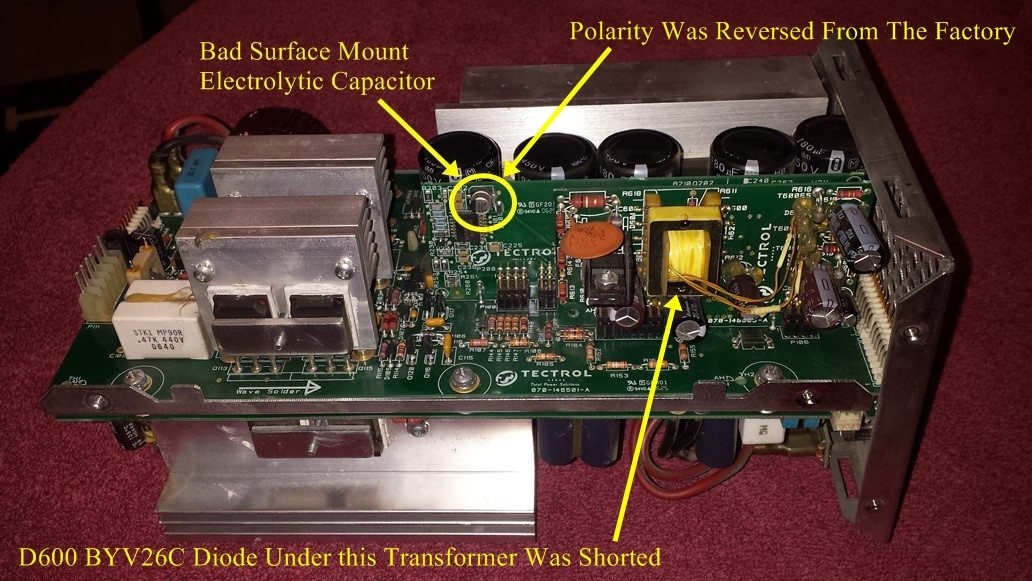 There is continuity from the D600 cathode to the Vcc pin #15 on the UC3854DW integrated circuit. C24 probably shorted from reversed polarity and caused the diode to fail, too.

I ordered some BYV26C diodes from Mouser at 0.44 each. I also bought a new 470uF 35 volt radial just in case, and some 22uF 35 volt surface mount caps just to use the exact same type as the original.

I didn’t think the supply would work. I thought there had to be more wrong than just a shorted diode and one exploded capacitor. I was wrong. The supply worked fine in the transmitter and I did a little happy dance when I saw the transmitter back at 100% power. It was operating at 72% with the missing power supply.” 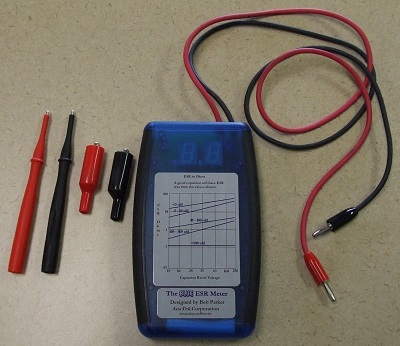 One note – Kevin mentions the ESR (Equivalent Series Resistance). In a nutshell, ESR is the sum of in-phase AC series resistance and is a good way to check a capacitor’s behaviour under working conditions beyond a standard capacitance test.

In an earlier email, Kevin had mentioned that the ESR meter he uses is the Anatek Blue… Google tells me these can be had from Amazon, as well as directly from Anatek.

One additional note – in one of Kevin’s previous emails, and as a general rule of thumb, it’s a good idea to replace the power supply fan whenever you do a repair. Most of the parts identified here are available from electronics supply stores – in the U.S., Mouser and Digikey are good resources, elsewhere, go with your usual source for components.

Thanks again to Kevin Larke – while I can’t promise this troubleshooting technique will be the solution in all, or even most, cases, it has worked for a few different supplies in this particular station. Hopefully it can be of some use to some of you!

That’s all I’ve got for this issue – as I said, trade show season is fast upon us, but it’s looking like I may have some home time this year to work on the vegetable garden and handle some of the other projects on my list, so feel free to reach out with any questions at all. With the constantly changing information being released about the latest virus, let’s all take care out there and I’ll see you next time – until then, be safe and happy engineering!