So, NAB is over and everybody hopefully made it back home in one piece, without too many after effects! I got to go home for 3-1/2 days, then it was off for another 10 days on the road, so this article will cover some conversations that took place over NAB and a few things I saw on the trip immediately following, as well as whatever else wanders through my tired mind in the process!

First and foremost, I want to put out a big THANK YOU to everybody who attended our Nautel Users’ Group session on the Sunday before NAB… we had to move venue this year and were concerned about attendance, but it was a pretty full house. 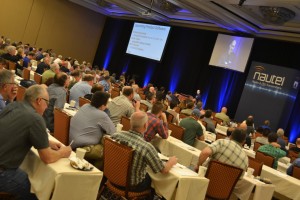 I know that NAB week is a madhouse of juggling schedules and trying to be too many places at once, so I really appreciate that folks gave up half a day to spend some time with us – hopefully we were able to provide some value for everybody. Incidentally, if you’re looking for hard copies of the presentations that were part of the NUG, you can find them here… NUG Presentations 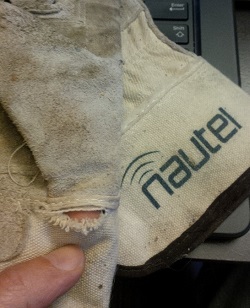 Secondly, a note on safety. Many of you know I typically stay behind after the show to help shove all that shiny stuff back into big wooden boxes. While most of the readers of this article won’t ever have the pleasure of trying to force 1,000 pounds of transmitter into a box that was originally built around it, some of you will at some point be part of removing a transmitter from a box. Wear gloves. Here’s why…

What you’re looking at is a pair of leather work gloves… John Whyte, our Marketing Director, provides these to the tear-down crew as part of our focus on safety at home and at work. The tear you see was made by a nail that was sticking out the side of a crate, in the process of maneuvering it into position on the floor. Better the glove than my wrist!

Also on the topic of safety, while I frequently mention ESR (Electric Shock Resistant) ratings for footwear, I don’t usually give much time to the benefits of steel toed shoes. Not really necessary for day-to-day tasks at the transmitter site, but if you’re part of a team unloading and installing a transmitter (or coax, or racks, or anything heavy), they can save you some bad bruises or broken foot parts!

During my time on the show floor, it seemed my conversations centered around two topics – adding HD Radio™ technology to a station and adding translators to a station (whether AM, FM, or translating an HD signal). I try to avoid sales stuff on this page, so I’m not going into “buy this or buy that” mode – you know where to find me if you need anything! However, there are a couple of things that do bear mentioning which seem to come up pretty often. Most engineering types reading this may already know these things – but it’s worth remembering that a lot of management folks don’t and they do need to be considered well before anything is purchased.

Power – especially in FM HD Radio related planning, it is important to remember that the digital carriers are amplitude modulated onto the analog carrier and that the Peak to Average Ratio needs to be taken into account when calculating antenna system tolerance (or transmitter capacity, but more on that in a second). Remember also, that as an AM signal, it is not simply possible to add the average HD carrier power to the analog power and call it a good day – you must allow for peak power, which could vary from as high as 6dB above the average power (4x) or as low as around 4dB (2.25 times, roughly), if you’re using a system with our HD Power Boost™. Let’s say, for example, that you have a 10kW analog TPO and you want to do HD Radio with carrier injection at -10dBc (10% of analog power). This means that you’ve got an analog power of 10kW, plus a peak digital power of up to 4kw, depending on the system you have – and coax cables, antennas, connectors, etc. have to have that number taken into account. This is especially important on a combined system – as an example, I have a customer with 2 x 25kW stations running into a combiner and feeding a 3-1/8” line up to the antenna. 3-1/8” is plenty for the analog power, but once we start looking at HD with higher injection levels, we pass the rating for the line.

Another thing to note is power headroom. Be sure to ask your manufacturer how they specify the power rating under various injection levels… whether it’s the analog power only, or whether it’s the combined analog + HD power. If they spec combined, then a transmitter rated for 25kW is going to come up short if you need a 25kW analog TPO, PLUS the digital power. It’s usually not an issue, but if you fall on the edge of a specified power range, it could be important. 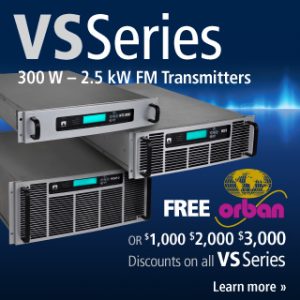 On translators, most of what you need to know can be found on our website – there are various webinars and presentations, including a good one on various “How To’s” related to our VS product line. Some of these won’t apply to translator use (such as backup audio), but some will.

A couple of things that are useful to know is that a translator won’t always be fed off air, depending on the situation, so it’s good to know how you’re going to set it up before you send in the Purchase Order. Also, most transmitters on the market these days, at least at translator power levels, can do FSK ID, so that you don’t need to do an on-air ID for FCC requirements… but you may still want to do one for station marketing or positioning purposes.

From the “things seen on the road” category, there are also a couple of items I’d like to bring up. First is grounding. I visited half a dozen transmitter sites over a week and a half on the road. They varied from virtually perfect, with single point grounds and bonded connections to somewhat less than stellar, with ground loops, or no grounds at all and connections made of two pieces of strap laid on top of each other with a wood screw driven through them. One or two were of a temporary nature – stuff that was done to have a ground in place while a new transmitter was being moved in, then would be made permanent once the old one was moved out and the installation completed. One or two were what I like to call “radio station temporary”. That is, they were done as a temporary solution many years ago and just never got cleaned up. Ultimately, a transmitter site is only as good as its grounding (and air handling, but that’s another topic). Whether the transmitter building is a shiny new concrete shelter with painted floors and top of the line everything, or if it’s a run down old house with bullet holes in the glass bricks that make up the windows, a good ground system can make the difference between repeated failures and trouble-free operation. As the saying goes, pay a little now (in time and copper) or a lot later (in repairs and parts). If your station is running on a budget, it is penny wise and pound foolish to skimp on the grounding, as the long term costs will almost always be significantly higher. If you run short of ideas, we’re just a phone call away, or you can find quite a bit of information here.

One of the other things I noticed was wiring. I saw racks with hundreds of feet of cable running all over the inside and no indications of what went from where to where. I saw racks with all wiring neatly tied down and labeled. In both cases, all equipment was operating, so you might say, “what’s the problem?” My response is, what happens if you need to take a day or two off and something does go wrong? Getting back to last month’s article, if you have somebody covering for you, how much harder is their job going to be if they have to trace down wiring that’s in a big jumble?

That’s about it for this issue – I’m sure there were lots of other things that came up during NAB that I’ve just forgotten in my travel-addled state of mind. If you’ve got any thoughts or suggestions, send me an email, I can always use new ideas!