Before I get started, I received several responses to the comments on “critter control” in my previous article providing valuable resources and ideas as follows:

Ed Poppe from Guam had this to say about the moth ball suggestion, “Put the moth balls in a baby food jar with puncture holes in the top. Put them inside all equipment cabinets…I even use them in tuning units and generators. No more problems with rats, snakes and even roaches.”

My thanks goes to:

Dave Dunsmoor from Minot, ND for suggesting bronze wool and mentioning that it is frequently available through gun suppliers.

Mark Hoenecke from Wausau, WI for providing McMaster-Carr as a supplier of bronze and stainless steel wool pads (www.mcmaster.com).

Brian Urban from Austin, TX for adding that spray foam (such as Great StuffTM) sprayed on top of the wool stuffed in the hole provides critter-tight filler.

Rick Fritsch of Lawton, OK for confirming the use of bronze or stainless steel wool pads.

Now on to other news – it seems that my comment on the need for heaters in some sites must have caught Mother Nature’s eye, as this month there was snow on the ground in 49 of the 50 states – hope nobody got caught working with frozen fingers!

It’s good to be well grounded…

Since lightning season will be getting under way before my next issue, I’d like to discuss grounding. All too frequently, we’ll visit a site that’s experiencing problems only to discover that adding (or, in some cases, removing) a strategic ground strap or connection can make all the difference in the world. I’d like to share a story of a site I visited about a year and a half ago.

I was making some rounds in the mid-west when I got a call from the office. Kevin Rodgers, our Director of Customer Service had heard I was in the Quincy area and wanted to know if I could grab one of the guys from there and head down to do a site inspection – we had a customer who had been having troubles with power supplies failing in an FM transmitter. Armed only with that knowledge, Nelson Bohorquez and I took a trip from Quincy and arrived on site. We gave the transmitter a once-over, but everything appeared to be working pretty much as planned, although there were a few items that caught our eye as we wandered around the site…

First, we noticed that there was a surge protector installed and that it did have a short, heavy cable going to what appeared to be a ground rod. Additional investigation showed that it really wasn’t a ground rod, but a piece of threaded rebar used to secure the building frame to the concrete pad. 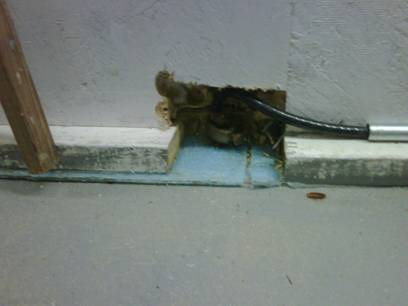 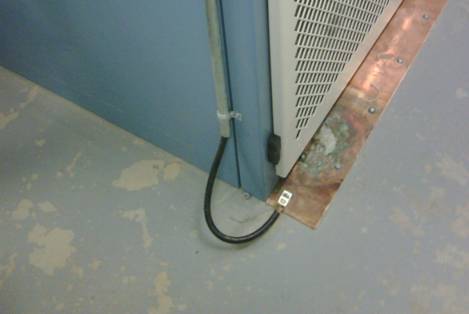 Then, it was out to the antenna, where we were gratified to see a nice heavy strap coming off the tower.

Unfortunately, the one thing we didn’t see anywhere between the tower and the transmitter, after checking the strap, was a ground rod… effectively, the tower was connected directly to the transmitter. At that point, we decided to further investigate the AC entrance ground, which was the only path to ground for lighting, besides through the transmitter power supplies. We found this… 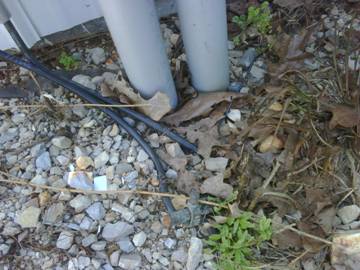 What you see in the above picture is indeed a ground rod. It was approximately two feet long and driven into the ground at about a 60 degree angle, so the far end was maybe a foot under ground – it could easily be wiggled loose by hand. In short, the best path to dissipate a lightning strike was through the transmitter power supplies to the AC lines.

Adding a ground rod to the tower base, removing the conduit from the transmitter and connecting a strap from the surge protector to a properly driven ground rod at the AC entrance, as well as connecting the tower ground rod and AC ground rod with strap around the outside of the building made all the difference in the world. Failures have decreased from one every couple of weeks during storm season to zero since July 2009.

Now, before you judge… I’ve known one of the engineers who took over this site for many years – he’s good – very good. Although I used this site as an illustration, it’s a scenario I’ve seen repeated over the years by some of the best in the business – when you’re busy, or under pressure, getting the transmitter running and getting on to the next problem can sometimes take precedence over finding out why it failed to begin with. Sometimes, something as simple as a $50 ground rod and $50 worth of copper strap can save hundreds or thousands of dollars in equipment repairs.

If you have a site that you’ve just taken over, taking the time to map out the grounding can be worth its weight in gold. I should note that I was at another site last summer where we ended up replacing a competitor transmitter after the power supply literally went up in flames. On doing the site inspection, we found something similar – there was excellent grounding at the tower and a well-installed surge protector – but the only path for a lightning surge to dissipate was through the transmitter’s power supply.

There are several good articles and books on lightning protection and grounding – we have a very good one in our Resources section under White Papers. In addition, Polyphaser used to publish an excellent book called “The Grounds for Lightning and EMP Protection” – it’s out of print now, but if you can find a copy, it’s a great resource.

Give me an inch, I’ll take a mile – I’m already well over the 600-800 words they said I should write! How about I solicit some war stories and comments on grounding and lightning protection? Tell me what you’ve seen, how bad it blew up and what fixed the site so it didn’t blow up again! Next issue I’ll be talking about ferrites and how they can be used for lightning protection and sometimes troubleshooting. I’ll weave in some of your tales from the field. Until then, play safe and have fun!