Hey folks and happy new year – here we are into 2020 and a new decade! It’s hard to believe that 2019 is behind us. It was our 50th anniversary year and there were several celebrations and promotions (more on promotions later).

In recognition of the occasion, I went on a run of ’50 Tips’ articles and presentations over the course of the year, starting with 50 Tips n Tricks for Nautel’s 50th! In August, we presented a Manager’s Engineering Notebook, made up of tips provided by Paul Tinkle, President of Thunderbolt Broadcasting in Martin, TN. That was followed in late October by 50 Tips & Tricks for Engineers and Managers, a joint webinar with Paul that took the top couple dozen from each of our presentations. Over and above all this, throughout the year, there were several SBE presentations, webinars for the Michigan Association of Broadcasters and SBE, as well as NAB and various state broadcast conventions.

All that to say, as much fun as it was, this will NOT be another ’50 tips for…’ article! Instead, I’m going to pick a few key Tips and expand on them some more. None of this will replace getting a proper education on these topics, but if it gets you thinking about the need for them, it’s a good start!

The Need for Good Documentation

First up is something that has been brought up several times, in different venues – we are not getting any younger and young people are not coming into broadcast engineering as fast as older ones are leaving the field. Now, we all know that very few people truly retire from this business and a lot who have left a full-time career are still performing a lot of consulting and contract work. However, over time, that too will slowly decline, and the scarcity of engineering talent will increase significantly. This means that the folks left in the field will be doing more and more, leaving less time to perform anything.

Taken a step further, although we all know it takes time to properly document anything, good documentation and the time it saves in the long run will become even more critical than it is already. How many times have you walked into a site or studio as the ‘new kid’ and there was no documentation at all, with respect to what wires go where, or what carries which signal? Or, how many times have you been troubleshooting something that you installed yourself five or six years (or more) ago and wondered, “exactly what did I do here, again?”

One of the tools I use to document is EverNote… it’s a ‘free basic’/’paid premium’ app that gives you the ability to create searchable notes, including photos and diagrams. I combine it with note taking in a Rocketbook™ notepad, which allows me to select icons on the pages of the notepad and, when scanned with my phone, downloads my handwritten notes and sketches directly to EverNote, where I can add the photos and diagrams and save to a PDF. The benefit of this is that even the basic version of EverNote incorporates a basic level of OCR, so that my handwritten notes can still be text searched. It’s not perfect, but it works for me. 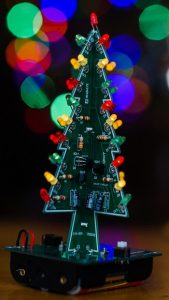 Not THAT kind of Christmas tree!

Find a solution that what works for you – because a product that you’re using is much, MUCH better than a superior product that you’re NOT using! You can find EverNote or Rocketbook via a quick Google search. Since the purpose here is to get you thinking about what works for you, rather than to endorse anything specific, I’ll leave it up to you to find your best solution… but absolutely document! Even if it’s an Excel spreadsheet for wiring charts, something is better than nothing and the first time you’re trying to follow the wiring off a 66 block (or a Christmas tree!) you’ll appreciate having some notes on what goes where!

Here’s an example of some of the documentation I’ll do during a transmitter site visit. It’s a rough scrawl, done in the Rocketbook and transferred to my EverNote account. 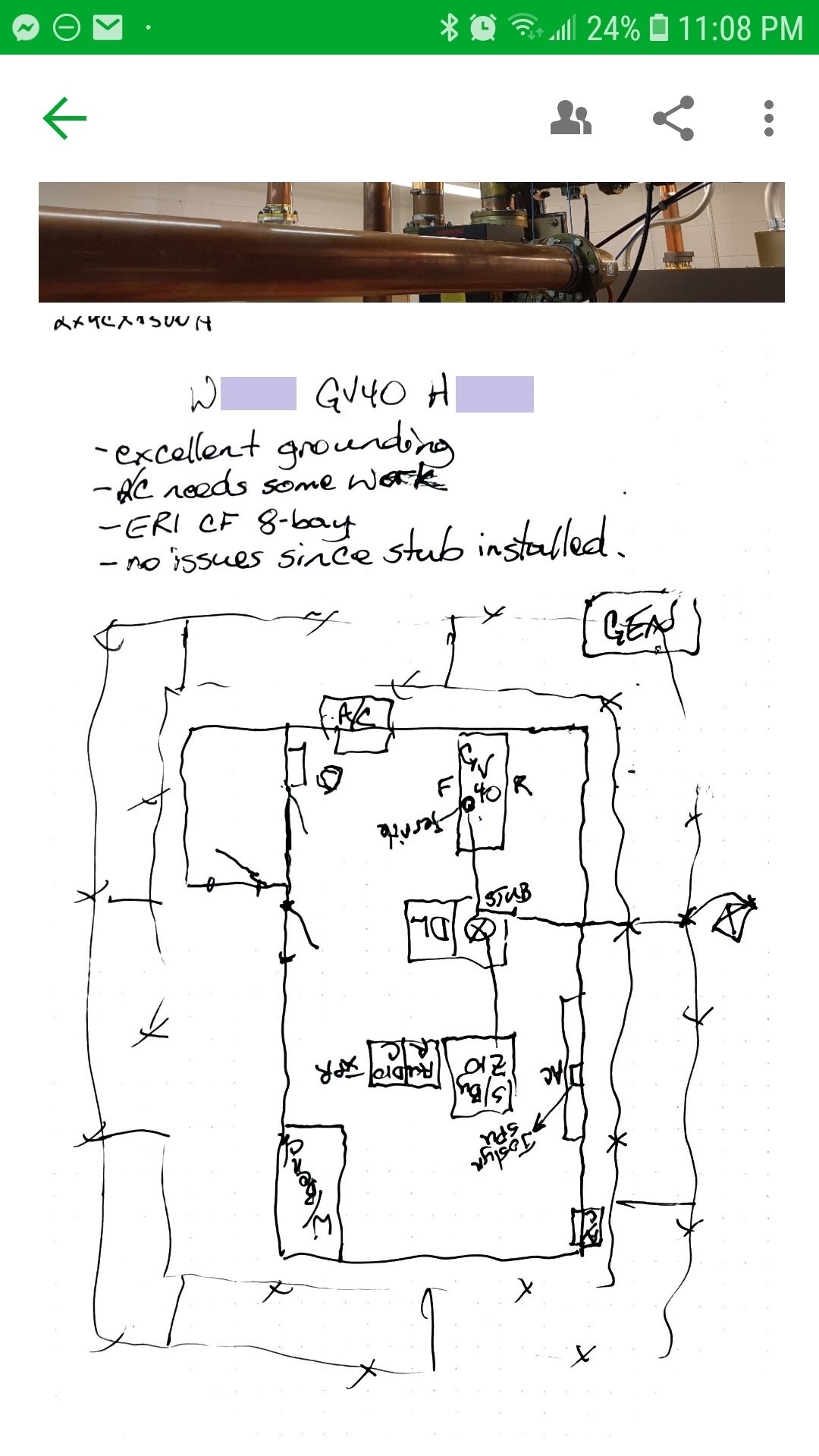 I didn’t say it had to make sense!

The point isn’t how neat it is, the point is that at some point down the road if I ever encounter this station again, I’ll be able to look at this and have a half decent idea as to what the site looks like. It’s valuable for helping others over the phone and for reminding myself what the situation was at that specific time and place. You can see at the top a portion of a photograph that’s also embedded in the notes for that site. Again, do what works for you, but have some level of documentation, so you know what you did, what you need to do (avoiding radio station temporary!) and have some notes for the next person, or whoever covers you if you take a vacation (that does happen, right?).

On the topic of documentation, and this is something Paul brought up both in his list and during our webinar, label everything! One perfect example would be our transmitters. For everything we make there’s a serial number which is almost always located on the rear of the equipment. Which is fine except when you call Support you’re usually in front of the equipment. Put the serial number on a label and stick it to the front – it’ll save a trip around the racks and avoid some frustration (because if you’re at the point of calling support, you’re probably already frustrated enough)! The support folks will sometimes need the serial number… different equipment may go through several revisions in its production life and station call signs change – or transmitters get moved from one station to another – so the serial number is the one sure way to make sure we’re sending you the right parts (we’re only human, we’ll still mix it up once in a while, but this sure reduces the odds of that happening). 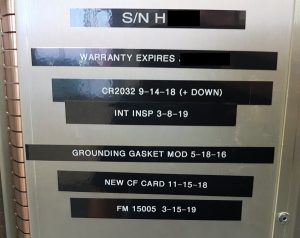 Also, label remote gear with station call signs or other identifier, label STL equipment or satellite gear with the appropriate frequency, label install dates for equipment, or upgrades installed. Here’s a photo I took inside one of our NX50 transmitters at what was one of the nicest AM sites I’ve encountered in recent history (shout out to Armando and the crew at Entercom Dallas-Fort Worth).

You can see from the photo that everything is right there, serial number, warranty expiration, when the controller battery was last replaced, even when the transmitter was last given an internal inspection/cleaning. There’s a label for a CF card replacement and another for a factory field upgrade that was installed, showing the date it was performed. Excellent work, folks!

I recently purchased a label maker for use around the house, and my wife promptly created labels for every spice jar in the cupboard. A friend made a joke about the labeling being out of control – but I’ve got to say, when I go in the spice cupboard now, it sure is nice not to have to take my glasses off and get right inside the cupboard to decipher the fine print on the jars!

Yes, we’ve beaten the internet security drum a lot already, but I’m going to add a few more notes anyway. First, it’s not the level of your IT security that matters, especially if there is no system in place to teach folks that they simply can’t bring an unscanned USB stick, or other external media carrying who knows what malware, into a production room and plug it into an automation or traffic computer.

IT security requires cooperation from virtually every part of a broadcast operation. It may require measures as drastic as disabling USB ports on critical machines or setting up a dedicated scanning computer in the lobby or common area, for any outside media to be used in a show.

I almost got caught by a phishing scam last week – it was an email that claimed to be from my bank and this one was unique in that the grammar was perfect and the linked addresses looked legitimate. Being paranoid by nature, I don’t click on links in email, even when I know the sender, unless I’m specifically expecting to get an email from that person with a link, so I ignored the email, logged into my banking app separately and verified that, no, the change they’d said had been made had not been made. I’m quite certain that if I had clicked the link in their email, that change would have been made quite shortly after, along with several others.

What’s the old saying, “it’s not paranoia if they really ARE out to get you”? That’s definitely true for IT security – always assume that something will be compromised… the goal is to find the fastest, simplest way to recover from that, while doing your best to prevent it – and still being able to do business as required.

We’re currently running a ‘Tube Buy Back’ promotion where we’ll deduct the price of your last tube purchase from a new transmitter (standard fine print, restrictions apply, etc.). This promotion runs until the end of (updated – NAB – whenever that may be) and it could make a noticeable difference in the cost of acquisition for a new rig. Learn more at nautel.com/tube

And, if you’re interested in the difference a new transmitter could make to your power bill, we’ve got Cost of Operation Calculators for both FM transmitters and AM transmitters.

Also, we just published a user report by Coy Sawyer, GM of WCLQ, about why they replaced a working tube transmitter with a newer solid-state one. You can find it here Tube Transmitter Working Fine; Replaced it Anyway! and it’s a great example of planning a purchase so that you’re upgrading equipment before it’s an off-air emergency. I must confess, I could have used this lesson myself recently when we had to quickly purchase a new car to replace my wife’s that was well loved, but long in the tooth. It had got to the point that it couldn’t be relied on to get her from point A to point B. As much time as I spend on the road, that’s not a viable situation, so we did have to get a new vehicle… but some proper planning would have made the purchase much less urgent than it was!

Coy Sawyer and the WCLQ tube to solid-state case study was also featured in this webinar Your last tube? Economic, Maintenance and Migration Considerations for Older Tube Transmitters

That’s about all I’ve got from this corner of the world – if you’re in northern climates, stay warm and safe, if in southern areas, stay cool and safe. Until next time, happy engineering folks.