It’s mid-summer, my busiest time of year and between trade shows, customer visits, the day job and the list of projects that need to be done around the house, it seems there are never enough hours in the day to get anything done.

Which brings me to something I’ve beat the drum on before and will probably continue to bring up in the future… maintenance and housekeeping. More and more, it feels like I arrive at sites that are well-installed, well-grounded and well-cooled – but there are basic housekeeping things that need to be dealt with.

Here are a few examples with photos – none of them will be identified, so don’t ask! Many of them have been corrected, some are recent, some are a few months or years old – but they all represent things that can have an effect on either performance or reliability of the site as a whole. Some are obvious, some a bit less so, some represent possible safety issues for both personnel and equipment. That said, let’s go… 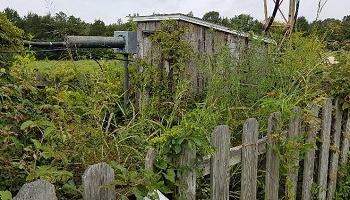 This is one of the more obvious ones – although there isn’t a frequent need to go into the tower enclosure, it’s a very good idea to keep the vegetation to a minimum.

Damp vines (during dew or rainy situations) can frequently cause towers to arc, it’s hard to do a visual inspection of ground components and there’s always the possibility of less than friendly wildlife taking up residence.

While it’s not necessary to have the entire enclosure defoliated (although not a bad idea), it’s definitely a good idea to keep things trimmed down as much as possible. 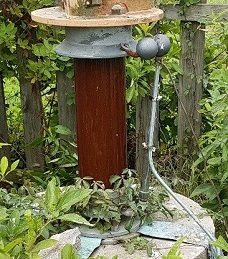 This one falls into the “radio station temporary” category. The ball gap had failed and a fix was made by hose clamping a piece of rod with the new ball mounted on it to the mounting rod for the old gap, supplementing that with a piece of copper wire.

The problem is that all the connections rely solely on pressure and there is no electromechanical bond, so as the components oxidize, resistance changes and we lose control over the primary defense against lightning strikes. Too many times, it’s way too easy to make a temporary fix that ends up still being there in five years (or longer).

Giving credit where it is due, the local engineer has made an effort to keep the tower base clear of vegetation and to keep the ball gap functional, there just needs to be a bit more effort made to make a more permanent fix.

Once again in the “radio station temporary” category, I haven’t been back to this site since the photo was taken – I’ll have to make it a point to go back in the next year or so and see if the custom compression grounding device is still there.

As with the previous example, the intent was there and an effort was made, but once a temporary repair is made, time and materials do need to be budgeted, in order to create the permanent solution.

Too many times, as we rush from fire to fire, it becomes much simpler to patch things up and move on to the next challenge, but there rarely seems to be enough time to go back and finish up with long-term repairs. 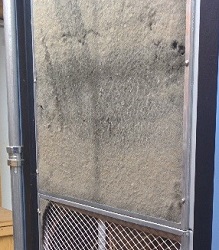 This is one of those photos that has since been corrected. The station in question essentially “saved” a couple of hundred dollars by not replacing the air filters.

Unfortunately, they then ended up spending several hundred dollars replacing a few fans that were too clogged with dust to function, plus the engineering time to remove and replace the fans, not to mention shortening the lifespan of the amplifier devices by running them near the top temperature rating.

Oh – and they ended up replacing the air filters anyway!

This is another situation that has been fixed. It makes me cringe every time I walk into a site and see an open electrical panel.

The safety implications to this one are quite clear – even if you are the only person who ever walks into the site, what happens if you happen to trip on something on the floor, or have a piece of conduit in hand, or… pick a scenario.

I am happy to report that I was visiting this site quite recently, about a year after this photo was taken and the cover is back on the electrical panel. 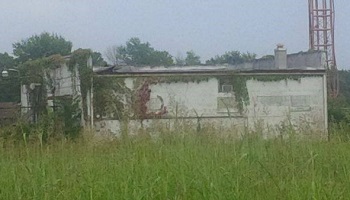 This one goes a little bit beyond basic grounds-keeping and maintenance, but if a portion of the roof is peeled up, especially the part above a piece of equipment that has a replacement cost of well over $100,000 it’s a really good idea to address it as quickly as possible, rather than throwing a tarp over the equipment.

While a tarp is a passable temporary solution, it can impede airflow and cooling, so having the root cause fixed as soon as possible is highly recommended.

This is another situation that I’ve been informed has since been resolved, although I have not be back to the site to verify first hand.

Ultimately, a lot of these things come back to the ability to impress upon station management or ownership the need to do basic maintenance tasks. Folks who are very faithful about getting regular oil changes in their personal vehicle somehow do not always see the need to do scheduled maintenance on the equipment that provides the revenue to pay for those oil changes. A lot of times it comes back to communication – engineers deal in watts, ohms, “this is broken and this is what I need to do to fix it”. Management deals in dollars, cents and “why is the engineer spending so much money?”

A potential solution is to show the value of something, rather than the cost. One of the things I tell folks on a fairly regular basis is that it is helpful to know what each station they maintain bills (or underwrites, for public stations) to the minute. That way, you know exactly what the cost of five minutes of off-air time (or ten minutes, or an hour/day/whatever) would be.

For example, if the station is off air for an average of two hours a year due to power failures and bills $100 an hour, that’s $200. If a small generator to allow operation at even a fraction of normal power can be had for under a thousand dollars, that investment has a five year payback. Obviously, these numbers are made up, but it gives an idea of how the generator then becomes an investment that saves the station money (in lost revenue) as opposed to being a cost. Sometimes it is all about how an idea is presented.

In the photo above with the fan filters, an alternate example would be oil changes – you expect to spend $50 on an oil change every 3-6 months, depending on mileage and driving conditions. By the same token, you should expect to spend some amount on replacing air filters periodically (also depending very much on conditions). As with a car, where the cost of not doing oil changes increases wear on the motor and reduced lifespan, the cost of not changing air filters is increased parts requirements and associated engineering costs… even if an engineer is on staff and paid a salary, time spent doing something that could have been avoided is time not being spent doing something else, so there is definitely a fixed value to that time.

That’s the rant for this issue – keep the weeds trimmed, make the temporary repairs permanent as quickly as possible and don’t forget to show management how much you save the station, not how much you cost it! Until next time – safe and happy engineering!