After the heat wave that ran through a large part of my territory through mid July, my thoughts have turned to cooling (ask me if I’m thinking of that in January and I can promise I’ll say no!). A lot of folks know that cooler equipment is happy equipment, but here’s an anecdote and some data to show how much happier it can be…

Let’s look at two of our 50 kW AM customers – both have the same model of transmitter, with the serial numbers only 28 units apart. The sites are similar in construction, although one is on a reclaimed landfill and the other in a field. Grounding is done quite well at both. The primary difference is air handling.

One site has a clean air room – it draws about 10,000 CFM of air into this room with three separate blowers. The blowers have pleated paper filters on their ductwork, similar to Farr model 20/20s. Then there is an additional wall of bag filters between this room and the transmitter area. The rear of the transmitter is walled off from the front, so that all air leaving the clean air room must go through the transmitter. In the front area, exhaust fans pull about 8,000 CFM out of the room. There is so much positive pressure that it can be hard to open the door to the transmitter room – but there is virtually no outside dust coming in. After two years of operation, the transmitter air filters were removed, because they were impeding air flow relative to what was designed in the site. Twenty years later, the amplifiers look like they are brand new. This site has experienced exactly two PA failures and one possible RF Drive amplifier failure in twenty-one years.

The other site is a bit different with respect to its air handling. Intake vents go through furnace air filters in to the open transmitter room – transmitter sitting in the middle of the floor. Exhaust air is pulled out of the building at about 5,000 CFM, creating quite a bit of negative pressure. Even with transmitter air filters in place, there is significant dust buildup. Over the same period of time, this transmitter has had a few RF output network failures (including one full meltdown) and loses several power amplifiers a year. That’s the difference good airflow makes. 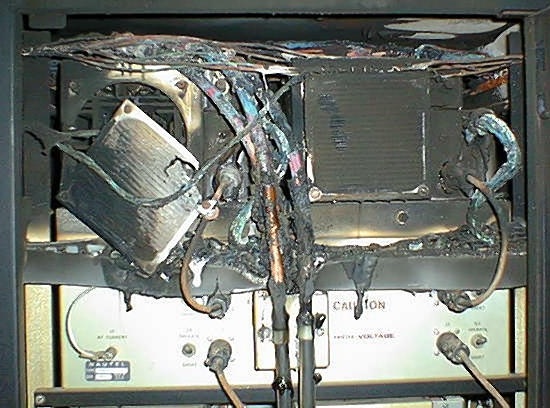 Bad stuff happens when things get too hot.

I was recently asking one of our engineers about the specifications regarding projected lifespan for one of the low volume cooling fans we use… it turned out to be five years – at an ambient temperature of 40 degrees Celsius (104 degrees Fahrenheit). For every ten degrees the ambient temperature is lowered, fan life doubles – so at 20 degrees C (68 degrees F), nominal fan life is 20 years!

Another aspect of air flow that is commonly overlooked is the actual direction of flow – it’s not enough to pull 10,000 CFM into the room and exhaust 8,000 CFM if it’s going against the flow of air through the equipment. One common thing we see is an intake fan on the side of the building, pulling in massive amounts of air and directing it behind the transmitter – where it shoots right past the equipment and creates a negative pressure zone behind the unit, making cooling fans work that much harder. This is another good reason for physically separating intake air from exhaust, such as with a wall built around the transmitter. Alternately, if a wall is not feasible, a baffle, to stop the air and build a positive pressure behind the transmitter, will work (in a pinch, I’ve leaned an old door against the side of a transmitter to redirect air into the rear of it – note that this should be a “temporary” solution… using the dictionary definition of temporary, not the generally practiced definition!)

Separating the intake air from the exhaust, plus positively pressurizing the room equals a happy transmitter!

With a few minor changes, it’s possible to provide major benefit to your transmitter – and if you ask anybody from the Midwest, things run much more smoothly when they’re not baking in their own skin!

Time flies – seems like just last week, we were getting ready for Vegas, now the Fall Radio Show is fast approaching. Hope to see some of you in Chicago – until then, stay cool!